Yesterday I posted about making my first snowman during the “Blizzard of 2014” but that was not the only thing we did in the snow. That snow just kept on falling and we just kept having more fun. As an adult you are more worried about if work is going to be closed and if you have enough bread and milk to last as you are unsure if you are going to be stuck at home for a day or a week. With all those thoughts in the back of my mind, I just decided o forget about and be 11 years old.

After making my first snowman, Nanny E and I went sledding and that was so fun. I have never done that before cause we never had any hills near my house. So Nanny E and I climbed up to the top of the biggest hill in my neighborhood and then proceed to sled down on top of a tote container lid. Here is what happened.

As you can see, I am not the best at sledding and need some practice. After sledding we made some snow cream. I have never had it and BrittWhitFun found a recipe on Facebook. We stuck a bowl outside to catch some snow and then added some milk, sugar, and vanilla extract to it and it came out really good. K-Dub loved it.

We did take K-Dub outside to enjoy the snow, but like last time, she hated it. She just stood in the garage and looked at us like we were idiots for standing out in the cold.

Once we did get her out there as soon as her hands touched the cold snow she cried. I hope when she gets older she appreciates a good snow day and finds out how much fun they are.

The snow continued to fall and soon you could not even see the streets. The roads were iced over but that did not stop some people. A woman called in Papa John’s pizza and they had to park at the end of the street and walk up to their house. That was crazy. 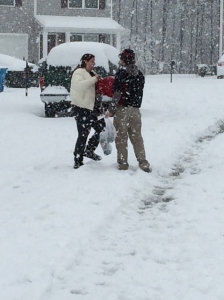 All and all it was a great snow vacation. I enjoy the fact that work was closed and I got to catch up on some TV. It was a great chance to try new things and even get a family picture in the snow.