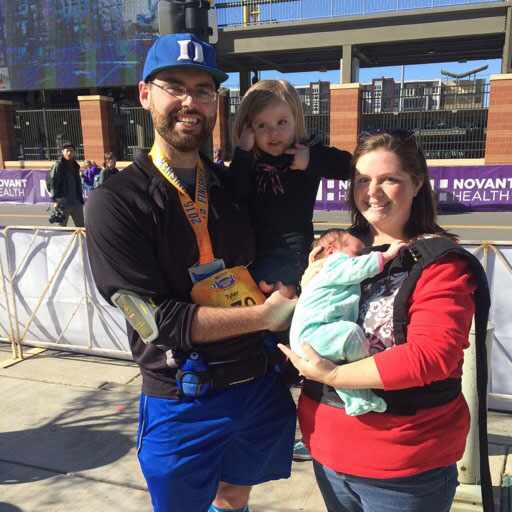 I really did mean to post this over the weekend but I was more focused on the fact that my legs were in a lot of pain. As from what you can tell from the title of this blog entry is that I did it! I conquered the most hardest challenge to date. I have to say that I really did not think I was going to make it. I was worried after month five of my training and a little embarrassed.

After my post about month five, I only ran 4 times before the marathon. I was nervous about the long runs cause I did not want to have any issues that close to race day. So I focused on my new job and taking care of Evie and K-Dub. Then about two weeks before the race, I decided it was time to put back on the running shoes. Those four runs were amazing. I felt like I was back and that nothing could stop me. I was ready for Thunder Road.

Thursday before the race I started to carb load. I loved it and saw it as a free pass to eat all the bread, pasta, and rice I wanted to. Who would not love that? Friday, I went and got my race packet and then reality sunk in. This was actually going to happen. Was I really ready? My family was coming to see me and I had friends who were tracking me on their phones. I just could not let then down.

The morning of the race, I got dressed and at a best bagel ever. Grabbed my bag of clothes to change into afterwards, made sure my water bottle were full, and then headed out the door. I parked at my office, which was a block from the race site and walked to the start line. There was no going back now.

Like any race, there is a lot of anticipation before the start. You start to get excited, your heart beats harder, your legs begin to twitch. Then… Its ready, set, GO!

The first half of the marathon I ran at a great 11 minute mile pace. I was consistent as I walked through every water station. I stayed with  my pacer who name was Tom. He was a great guy. We ran through Myers Park and through South Tryon Street as people were cheering us on along the way. I felt like a rock star and that this was going to be my race. I was going to do this.

When you get to mile 13 the course splits and the half marathon runners head one way to the finish line and the marathon runners go the other way. This was when the race got really boring. By the time was on the course to for the Marathon portion of the race, my pacer was gone and there was no longer anyone in front of me. I was told this was going to happen. There were only 900 marathon runners and I guess I was in the middle of them. 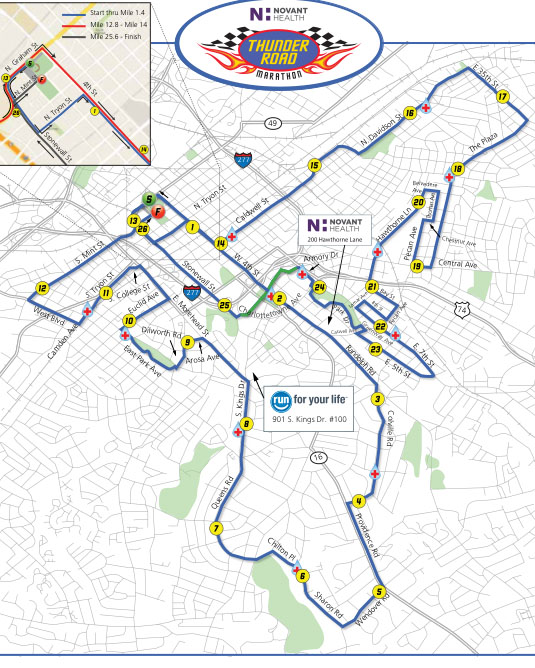 Miles 13 to 18 were boring. There was only a few amount of people cheering you on. I felt alone. Then I got to NoDa. NoDa is a part of Charlotte that really is cool. They are the home of artist, musicians,  actors, and craft beer. LOTS of craft beer. These people were great. They made miles 17 and 18 a lot of fun. It was like running through a live in the morning frat party.

Around mile 20 and 21 was wear the problems started, At this point my body was crazy sore and I felt like my body was rejecting me. My legs started to cramp and I was exhausted. At this point I had been running for almost four hours. I had to run for five minutes and walk for one. This was my pace through miles 21 to 24. Soon into mile 23 the 5:15 pacers passed me and I knew I had to pick it up.

The last couple of mile I ran it. I was coming through Charlottetown and I could see the finish line in site. The home stretch. I went for it. I ran all way and passed the 26 mile marker knowing that around the corner my family would be there waiting on me. I was right. K-Dub was there and I picked her up and carried her across the finish line with me. She looked at me and said “Good Job Daddy”! 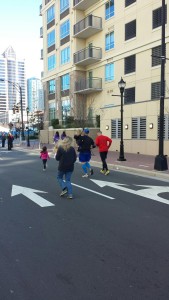 After the race, I got my medal, took a few pictures and ate the best pizza of my life at Mellow Mushroom. I went over to my Sister-in-law’s house and showered and ate dinner. The pain started to settle in as I got home and in the bed that night. Sunday I could barley walk.. Was it worth it? HELL YES! Would I run another marathon anytime soon? HELL NO!

2 thoughts on “#MarathonRunner 26.2 Miles Of Pride”