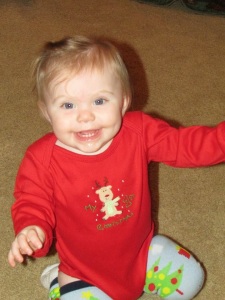 This past Saturday we had our annual family Christmas Party. This was the first year we had it at a different place. I look forward to this gathering every year cause its a chance to catch up with old family members that you never hear from. That and the ones you wish you could trade. Just kidding!

This year was set to be the first one that K-Dub got to go (I guess you could count last year with her being inside the womb) and she had a really great time. When we first got their she was very shy and would not let go of my shirt. After about 20 minutes of everyone gathering around to say how cute she was, she felt right at home and started to put on a show. She would crawl around on her knees and make noises, while everyone cheered her on. Everyone kept commenting on how the video of her licking the refrigerator was so funny. I would then tell them that K-Dub tried to eat our Christmas tree before we came over and that I was not worried cause she was getting lots of fiber. Yea I really think something is wrong with my kid but I love her.

Then her cousins came in  the house and then it was a real party. Charlee Bell and Hayden and K-Dub had everyone rolling. I wish I had some of Charlee’s energy for a day. K-Dub was having so much fun that she forgot about her usual sleep schedule at 7. It was that she was either having so much fun or the fact that my brother was letting her drink coke(There will be revenge!).

So after having the most awkward family photo made of us ever (See below), we but K-Dub in the car and before we made it out of the neighborhood she was out like a light. This made getting her to bed a lot easier.

I love family Christmas parties. Not only are they a great way to catch up with family, but they are also a great chance to let your kids make tire themselves out! WIN!